With venues shuttered because of the coronavirus pandemic, people working in the theatre industry have had to shift their creativity online, as a result of which we’ve seen a range of digital concerts and variety-style shows, performed in people’s homes and, more recently, in COVID-safe venues.

Now comes a full musical, live streamed from a large house in Sydney with a central computer, where all the cast and crew are based but socially distanced – and it really takes things up a notch with its inventive staging and sophisticated use of technology. 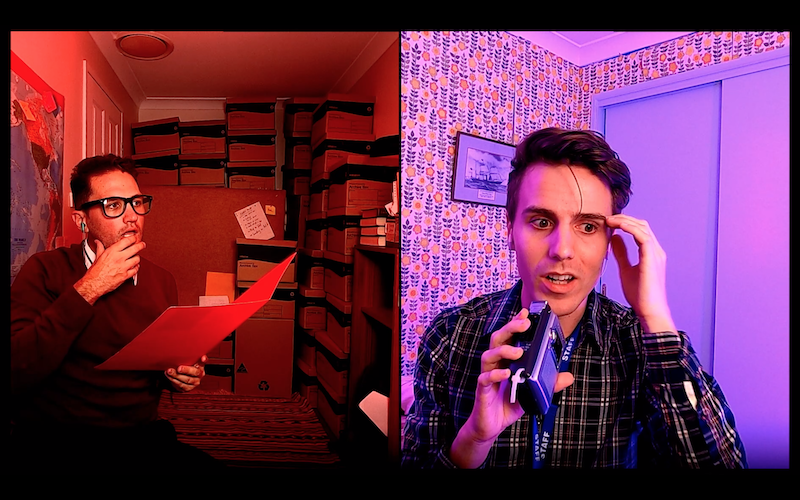 Australian producers Keith Muir, Sam Ducker and Steven Kreamer had planned to stage the Australian premiere of the musical Who’s Your Baghdaddy? Or How I Started the Iraq War live on stage in September. Then the coronavirus hit. Instead of postponing or cancelling, they decided to present the show as a live streamed production.

Who’s Your Baghdaddy? was written by Marshall Paillet (music and book) and A.D. Penedo (lyrics and book). Inspired by a true story, the satirical musical comedy premiered Off-Off Broadway in 2005 and was then produced Off-Broadway in 2017.

The name of the musical does it no favours, but ignore the off-putting title because it’s a cleverly constructed show that tells a salutary, seemingly ridiculous tale about one of the worst intelligence blunders in modern history. In fact, it has you shaking your head in disbelief at times, particularly when you see real footage of US President George W. Bush, and Secretary of State Colin Powell justifying the invasion of Iraq in his 2003 speech to the UN Security Council. 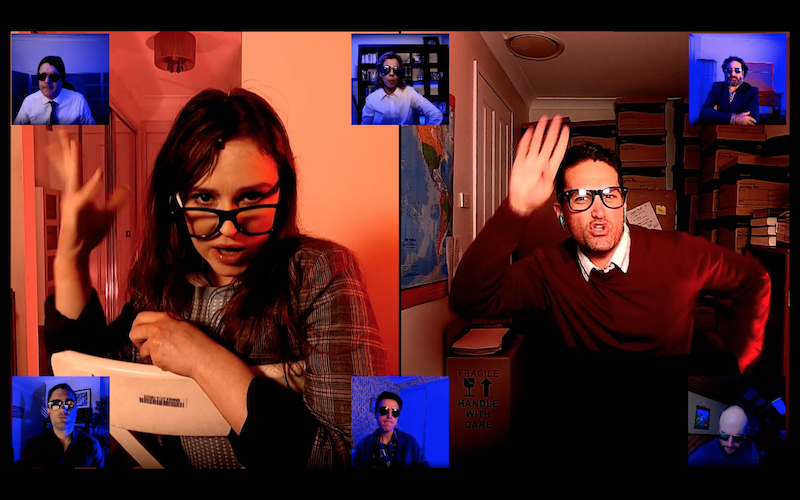 Laura Murphy and Adam Rennie, with the rest of cast

Who’s Your Baghdaddy? begins at an AA-style support group for people struggling to come to terms with the role they played in starting the Iraq War. The action then flashes back to April 2001. An Iraqi defector (Troy Sussman) arrives at Frankfurt airport. All the Arabic-speaking interrogators who usually interview political asylum seekers are away so a fresh-faced junior called Richart (Matthew Predny) is thrown into the fray. Richart, who dreams of being “Das Man”, quickly finds himself out of his depth as the fast-talking Iraqi chemical engineer, codenamed Curveball, spins a yarn about Saddam Hussein’s supposed mobile biological weapon labs.

Meanwhile, the CIA has become involved. Biological warfare expert Martin (Doug Hansell) who has published his compendium on biological weapons online and been banished to Basement 2 as a result, sees it as a chance to be redeemed. Analyst Berry (Laura Murphy) is determined to prove her worth, while translator Jerry (Adam Rennie) wants to impress Berry. As for “company man” Tyler (Phillip Lowe), he just wants them all to follow protocol and stick to the rules.

Before too long, they all realise that Curveball may be bending the truth, but each of them hopes that one of the others will call it out. Instead vanity, ambition, and the mistranslation of one word lead them further and further into trouble. Then the September 11 terrorist attacks occur, and Curveball’s questionable claims take on a life of their own.

With support groups currently taking place on Zoom because of restrictions around COVID-19, the producers quickly saw the potential for presenting Who’s Your Baghdaddy? online – and they blow you away with the fantastic job they’ve done. 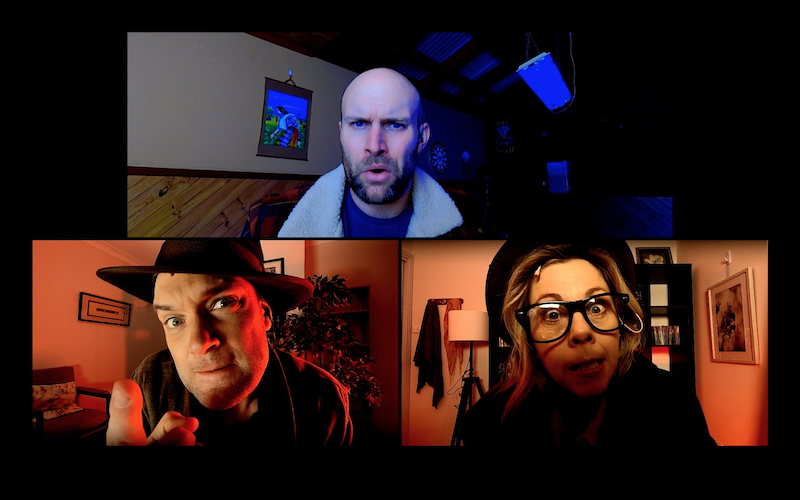 The Australian live stream is directed by Neil Gooding – from New York (oh brave new world!) – and it’s ingeniously presented. The technology is super smart. Though it looks like a Zoom meeting initially, the clever use of split screens quickly takes it to another level. When a performer is singing a number, they are centrally focussed, with the other performers who are doing backing vocals in smaller frames which zip around the main screen.

Designer Isabel Hudson has created distinctively different spaces for the various characters and her bold, intelligent use of vibrant colour is exhilarating. The lighting design by Phoebe Pilcher enhances it perfectly. The choreography by Leah Howard is simple, given the limited space, but very effective, while props such as files of documents and glasses of wine, appear to be passed between the characters.

Musically, the show uses an eclectic mix of Broadway pop, rap and hip-hop, and has a 90s feel. Numbers range from the touching, elegiac Speak to Me Tomorrow sung by Curveball, to the rap number Berry and the Bad Boy by Berry and Jerry.

Musical Director Steven Kreamer nails the score, and the sound (designed by Dave Bergman) is excellent, with no synching issues whatsoever thanks to the central computer into which all the performers’ cameras feed. In fact, props to Technical Director Michael Goodyear and the entire team for their sterling, innovative work. 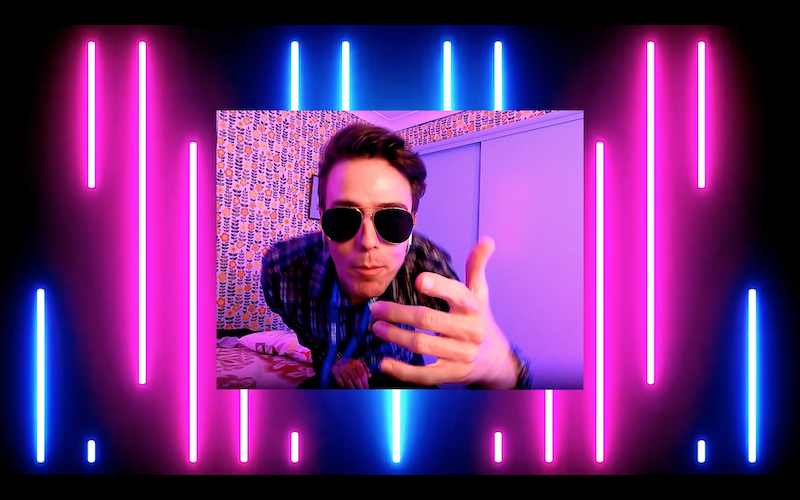 The performers act straight to camera and are all excellent, balancing the satire with an authenticity that makes the characters’ various flaws feel believably human. Murphy is a blast of energy as Berry who is looking for excitement in her job and is determined to make things happen, while Rennie balances her as a calmer counterpoint, equally keen to impress. Hansell exudes a dark, obsessive quality as Marty, Predny is suitably bright-eyed and naïve as the hapless Richart, and Lowe conveys the uptight ordinariness of the colourless “company man”. Blake Erickson and Katrina Retallick play an entertaining line-up of supporting roles, including several exuberant comic caricatures.

Though you are watching the show on screen, the performers communicate with the energy of a live musical and you are swept up in the story – a story which still feels very relevant given its themes around truth and fake news. If you love musicals and are aching to see a live show, this is a wonderful substitute. Don’t miss it.

Who’s Your Baghdaddy? will live steam until June 28. A recording of the show is available to view on demand until July 12